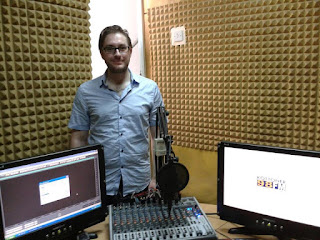 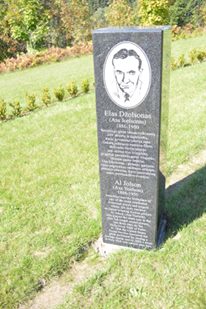 Al Jolson received a memorial stone at Jakovas Bunka's Litvak memorial park near Plateliai, a small village in the North West of Lithuania, Al Jolson's home country. Jakovas Bunka recently passed away and was considered the last Jew in the town of Plunge, close to Plateliai. Bunka's son Eugenijus, journalist, writer, and activist, is now leading the foundation.

Not too far away from Plateliai is Klaipeda, a major harbor which was the harbor Al Jolson along with his mother and siblings passed through on their way from Seredzius to Liverpool in 1894.

Jens and Wyman attended the inauguration to capture this amazing event for AJ-Images' upcoming Jolson documentary ON THE ROAD TO AL JOLSON.

This event is a huge step into the direction of Jolson finally being recognized and acknowledged in his home country after all of Jolson's work was made available to the public with the opening of the Vilnius Jewish Public Library on December 16th, 2011 - thanks to the efforts of AJ-Images and the help of the Int'l. Al Jolson Society, and of course Wyman Brent, the founder of the VJPL.

Here you can visit the website of the Jakovas Bunka Charity and Sponsorship Fund.
Eingestellt von Unknown um 11:58 PM No comments: 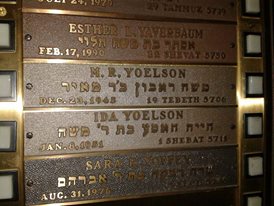