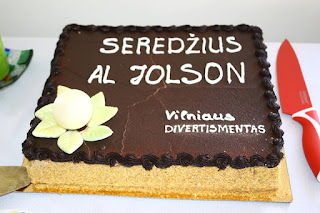 Jolson fans all over the world might have this dream of... maybe a new Jolson tribute CD coming out, or a book, or having a new Jolson Festival being established somewhere (besides those held by the International Al Jolson Society), or a Jolson conference, or even a new Jolson momument being opened somewhere? Something that introduces new, young people to the World's Greatest Entertainer. Well, ALL OF THIS is about to happen THIS YEAR in Lithuania, Jolson's country of origin.

Until recently, not much was going on with Jolson in Lithuania. Only few people in Lithuania know Jolson's name. Now, thanks to Irena Karsokiene, a conductor, musician, and Jolson fan herself, things look A LOT different. The story behind it is amazing, too. Irena won the Green Card in 2001 and discovered Jolson while being in the USA. 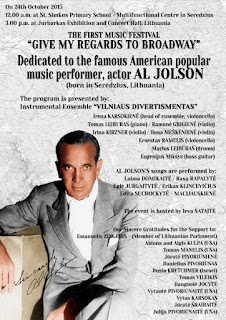 Last October, she organized the FIRST MUSIC FESTIVAL DEDICATED TO AL JOLSON in Seredzius, the little village Jolson was born in (Jens and I only found out about it AFTER it had taken place). If you saw this little village which still looks quite a bit like late 19th, early 20th century, you would fully understand how amazing an event like this really is. Irena also recorded a tribute CD and will publish a book on Jolson this fall. Another festival will be held in Lithuania this year, an international conference, and a monument will be unveiled in late September.


We will receive more information soon and will share it here, on our website www.aj-images.com and on our AJ-Images Facebook page. In any case, mark your calendars for May 10th (Jolson music Festival) and September 30th (monument/conference), and if you can make it: COME TO LITHUANIA, Jolson's country of origin!

We will definitely be there to film the events for our upcoming Jolson documentary ON THE ROAD TO AL JOLSON (est. release date: October 2017). www.roadtoaljolson.com.
Eingestellt von Unknown um 11:42 AM