THE INTERNATIONAL JEW, an anti-Semitic four volume set of pamphlets published by HENRY FORD in the early 1920s, contained a list that was supposed to describe the Jewish influence in American life and culture. PROF. MARJORIE GARBER from Harvard University talked about that list in a course on Shakespeare (spring 2007). While summing up those nonsense points, the students started to laugh when Henry Ford talked about jazz music being Jewish music. Prof. Garber then mentions briefly the beginning of jazz music and an artist called AL JOLSON. 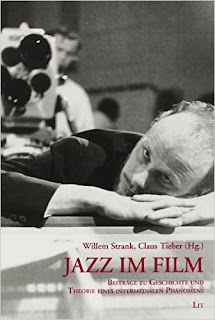 How much the way Al Jolson performed and interpreted songs was actually linked to jazz music, you can read in my article AL JOLSON AND THE "JEWISH JAZZ" in JAZZ IN FILM, available on amazon. There are many great articles in this book that look at the topic of jazz in general and jazz in film in particular from many different angles. The language is German.