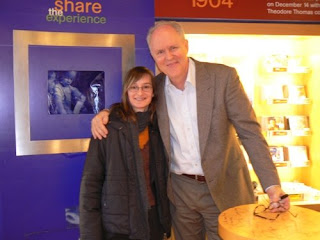 In 2008, I discovered John Lithgow because of his wonderful children's book MAHALIA MOUSE GOES TO COLLEGE. It is an inspiring book for children (and adults). Shortly after that I saw him live in his one-man show STORIES BY HEART (in New York City and London); a show at least equally inspiring. Jens and I met John Lithgow in Chicago in February of 2008 and in New York City later that year. We started to interview a few people and collected some very interesting material about Mr. Lithgow. We will share parts of this material in a special FLAp Podcast episode, so stay tuned for that.

Famous stage, screen, and TV actor John Lithgow was born into a theater family. His father, Arthur Lithgow, was a stage actor, director, and producer. He also founded the Great Lakes Theater Festival in Ohio.


After graduating from Harvard University, John Lithgow was trained at the London Academy of Music and Dramatic Art.


Among many others, his New York theater work include:
The Changing Room, My Fat Friend, The Front Page, M. Butterfly, The Retreat from Moscow, Mrs. Farnsworth, All My Sons, Mr. and Mrs. Fitch, and the musicals Sweet Smell of Success and Dirty Rotten Scoundrels.
Having appeared in more than 30 films, his work include:
The World according to Garp, Terms of Endearment, All That Jazz, Blow Out, Twilight Zone: the Movie, Footloose, 2010, Harry and the Hendersons, Raising Cain, Cliffhanger, Shrek, Kinsey, Dreamgirls, and Confessions of a Shopaholic.
Among his significant work for TV were Third Rock from the Sun (NBC), Don Quixote (TNT), The Life and Death of Peter Sellers (HBO), and the 4th season of Dexter (Showtime).


John Lithgow had also worked as a stage director early in his career, and also acts as a painter. He received his star on the Hollywood Walk of Fame in 2001. Four years later he was included in the New York Theatre Hall of Fame. In the same year he received an Honorary Doctorate of Fine Arts from Harvard University.