THE JAZZ SINGER in GERMANY


After the big success of THE SINGING FOOL which premiered in Berlin on June 3rd, 1929, THE JAZZ SINGER celebrated its premiere in Berlin on November 26th, 1929. In 2007, Jens and I were looking for the original newspaper ads for THE JAZZ SINGER for screenings at movie theaters in our hometown Kiel in Northern Germany (in 1930). 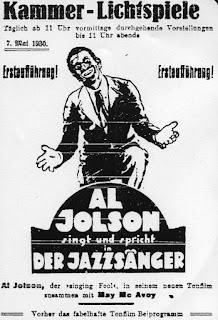 Al Jolson sings and talks
in "The Jazz Singer"

Al Jolson, the "Singing Fool", in his new talkie
together with May Mc Avoy 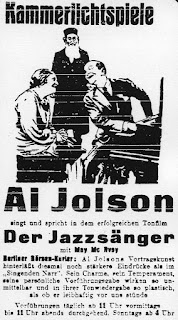 Börsen-Kurier Berlin:
This time Al Jolson's elocution
leaves an even stronger impression than it does
in "The Singing Fool". His charm, his temper,
his personal performance abilities, seem to be so intuitively,
and its sound reproduction so vividly,
as if he were incarnately standing in front of us.