We have been working on a JOLSON DOCUMENTARY for pretty much a decade now. Do you know who AL JOLSON was? 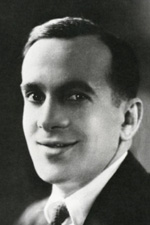 AL JOLSON (born 1886 as Asa Yoelson in Seredzius, Lithuania), was one of the most successful entertainers in the first half of the twentieth century. Today, he is mainly known for his role in the first talking picture THE JAZZ SINGER, produced by Warner Bros. in 1927. Before that film was made, Jolson had already "owned" Broadway for more than two decades. His song SONNY BOY, the theme song of the talkie THE SINGING FOOL (1928), could very well be the first song of a movie to sell over a million copies.

Jolson remained a world icon until he passed away in 1950, shortly before the invention of TV. For his contributions to American soldiers during WWII and the Korean War, a trip that eventually cost him his life, George Marshall, Secretary of State, awarded him with the Medal of Merit, the greatest American award for civilians. Being the star of stage, screen, and radio, he shaped the American popular culture as well as the music industry as we know it today.

Jolson influenced numerous later artists including Frank Sinatra, Elvis Presley, Mick Jagger, Michael Jackson, and Rod Stewart. Of course, there is much more to discover about Jolson and his career; we will continue to publish interesting bits & pieces on our blog. For more information, we highly recommend the website of the INTERNATIONAL AL JOLSON SOCIETY.

Whether you have known Jolson's name for a long time or you just now read something about him, you might like to check out the first episode of Nigel Dreiners WILD ABOUT JOLSON PODCAST I participate(d) in.